The Art of Violin 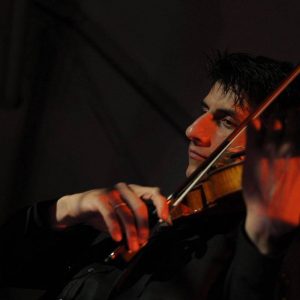 Alex Léon is a young violinist, classically trained, but with a strong leaning towards experimentation and new music languages.

Born in 1987 in Sigheti Marmatiei, a city in northern Romania, he started studying the violin at the age of 5, at the small “George Enescu” music school, named after the great Romanian violinist.

At the age of 13, he was admitted to the prestigious “Sigismund Toduta” grammar school, in Cluj-Napoca, where he studied under the Maestro Soltan Viorel.

In 2003, Alex moved to live in Italy, in order to continue his studies at the Conservatorio “N. Paganini” in Genoa, where he graduated under the tutelage of Prof. Valerio Giannarelli.

In 2011, he studied at the International Menuhin Music Academy in Switzerland, under the guidance of Maxim Vengerov, Liviu Primary and Oleg Kasiv.

In 2014, he perfected his playing by studying under Bin Huang, a winner of numerous awards, including the Paganini Premier Award.

From 2016 until 2019 he studied chamber music under Massimo Quarta in Genoa and after Piergiorgio Rosso in Turin.

During his career, Alex has known and collaborated with many noted musicians, among whom is the pianist Stefano Nozzoli. The two artists have formed a duo which has, over the years, built and performed a great repertoire of chamber music, ranging from J. S. Bach, Mozart, and Schubert to Beethoven, Brahms, Debussy and Prokofiev.

Alex is a versatile violinist who is interested in many genres of music.

In 2008, he started to collaborate with the Yo Yo Mundi Piemontese folk-rock group, with whom he recorded the CDs Album Rosso  and Munfrà.  Together with Yo Yo Mundi he performed in many concerts, both in Italy and abroad, in prestigious theatres and concert venues. This collaboration lasted until 2013, and gave Alex an enormously valuable cultural and musical experience, which has influenced the musician he has become.

He was one of the founding members of “Orchestra Multietnica Furasté”; a music and multicultural group with which Alex performed numerous concerts around Italy between 2010 to 2013.

He has performed in many concerts as a guest musician with the bands “The Vad Vuc” (in Switzerland), and “In Vivo Veritas”. He has played at the Festival de Chassepierre in Belgium and given numerous concerts throughout Italy.

The search for new music forms and languages has taken Alex to deepen his knowledge of improvisation, through which he feels he can best express his own ideas and feelings.